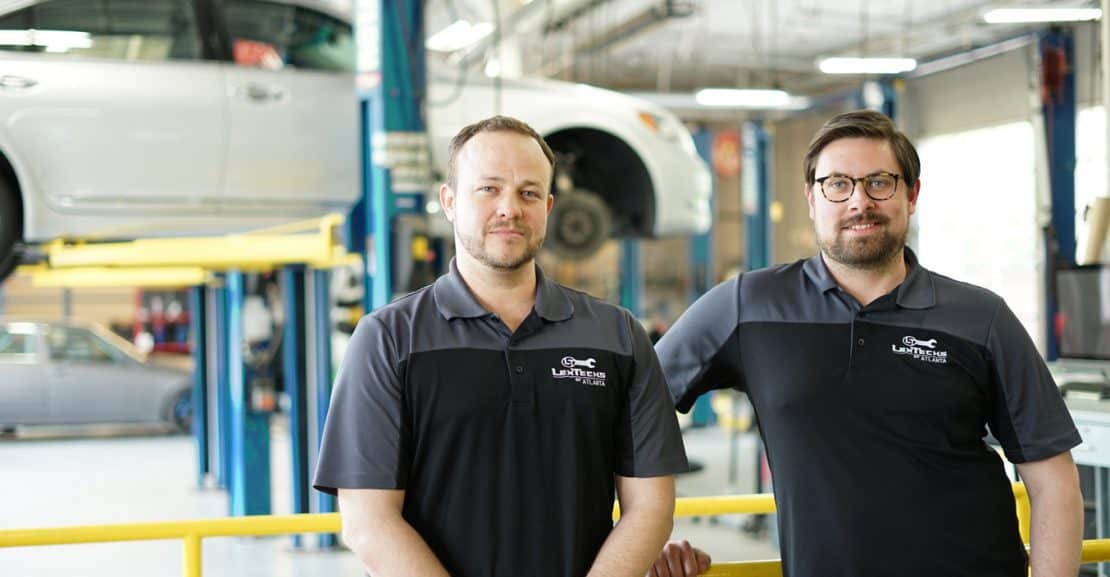 “We specialize in this line. That means we’re likely to know a lot more about your Lexus than a general mechanic would,”

Chad Almond has come a long way since he graduated from high school in 2000, but that’s not obvious looking out the front window of his Lexus service and repair specialty shop, LexTechs of Atlanta. The view is his alma mater, Decatur High School. “I’m back in my old neighborhood,” Almond said with a chuckle. “In fact, my parents’ first house was just down the street on Sycamore, so I definitely have roots in the community.”

And those aren’t his only links to his childhood years. His business partner, Huston Hatch, has been his best buddy since they were both 8 years old and pupils at Pine Ridge Elementary School in Stone Mountain. The two remained friends after Hatch moved to Gwinnett County and never lost touch over the years. A mutual interest in automobiles is one of the ties that bind them.

While Hatch liked to keep his hands under the hood, Almond pursued the sales and business end of the automotive world. When the economy started to go sour about three years ago, the friends decided to go into business together. Their skills and interests complement each other perfectly, the partners said.

Their original location was an office park in Tucker, but after a while they started looking for a place where they would have greater exposure and could offer nicer amenities for their customers.

He added that his prices are generally lower than what dealers charge. “Sometimes customers can save as much as 50 percent [by] coming to us, and they get the same parts and the same qualified mechanics,” he said.

Before he and Hatch opened their own shop, Hatch had worked for dealerships. “Some of them sell customers work that they don’t really need. I was never comfortable with that,” he said. “One of the things we pride ourselves in here is an honest relationship with customers.”

Hatch added, “We explain exactly what we’re doing with a customer’s car in simple language—no industry jargon. We’ll even show the customer what we’re repairing.”

Hatch said he first became interested in the Lexus brand when his mother bought one in 1997. He still has it. “It has about 275,000 miles on it, and it still runs,” he said.

The fact that LexTechs is brand specific is another plus for customers, according to Almond. “We specialize in this line. That means we’re likely to know a lot more about your Lexus than a general mechanic would,” he said, noting that the shop also repairs Toyotas, a product of the same automaker that produces Lexus.

Almond and Hatch also said they try to go the extra mile on customer service. For example, they said, although their regular hours are 9 a.m. to 6 p.m. if a customer needs to drop his or her car off a little earlier or pick it up a little later, they make every effort to accommodate them.